A colonoscopy is an examination of the large intestine using a thin flexible video endoscope.

1. Direct visualization of pathology sucy as polyps in the bowel, bowel cancer, inflammation of the bowel(colitis) and abnormal blood vessels(angiodysplasia)

2. Biopsies can be taken and sent to the pathology lab for testing.

3. Polypectomy : If there are polyps - most can be removed at the same time(ie by snaring or piecemeal biopsies)

4. Haemorrhoids - if there are haemorrhoids, these can be banded at the same time. Banding is good a reducing bleeding from haemorrhoids and can also reduce the size of a prolapsing haemorrhoids.

Risks - pain/discomfort(rarely if severe, the bands may need to be removed), bleeding

(Please check that your endoscopist will treat the haemorrhoids if found during the colonoscopy - Dr Cheah would do this routinely if this has been discussed preop, but many endoscopists refer this on to surgeons like Dr Cheah to treat)

1. CT colonography & Barium enema - these are radiological investigations. Advantage - not as invasive, not requiring sedation. Disadvantage - not able to do any biopsy or polypectomy, a small polyp may be missed, mucosal abnormality eg colitis, angidysplasia may be missed, exposure to radiation, poor views especially of lower rectum due to balloon catheter inserted to perform the examination

2. Faecal occult blood test(FOBT) - this is good for screening if one does not have any symptoms yet. Not recommended if one already has rectal bleeding.

3. Capsule endoscopy(Pill Camera) - good for imaging small bowel. But may miss lesions due to the randomness of pictures being taken

Sedation will be given by the anaesthetist during the procedure.

After the colonoscopy, you would  need to be observed in recovery before being discharged. You may feel some bloating, abdominal cramps/lower back pain, urge to go to the toilet or pass flatus.

You should not drive or operated heavy machinery or sign any legal documents for 12 hours after the procedure.

Intolerance of the bowel preparation or reaction to the anaesthetic medications(nausea & vomiting).

Incomplete colonoscopy(less than 5%) - sometimes it is not possible to reach the caecum or the terminal ileum safely. This can be due to looping of the bowel, a long tortous colon, a tight angle of the colon making it unsafe to proceed or narrowing of the bowel from cancer or diverticular disease. In this case, a CT colonography is usually recommended to view the rest of the bowel.

Missing views of a polyp - a polyp may be missed if very small, covered by faeculent material(hence it is important to have a good bowel preparation) or hidden behind a mucosal fold or within a diverticulum/appendix

Perforation (hole in the bowel) or major bleeding from the bowel are  rare(1 in 1000; but risks increases if a large polyp is removed or there are adhesions or cancer outside the colon holding down the bowel causing a tear when the scope is passed) If they occur, surgery(laparotomy, bowel resection or control of bleeding from the spleen) or rarely blood transfusion may be required.

Other risks include - infection(sepsis), aspiration of the stomach contents(hence it is important not to have any clear fluids 2 hours prior to the sedation), incidental heart attack/stroke/death, slowing of heart rate during the procedure(from insufflation of the bowel with air/carbon dioxide gas)

If is important to seek urgent medical attention if you have severe abdominal pain, heavy bleeding, black stools or fever in the days after the procedure.

Consult with your General Practitioner about stopping any blood-thinning medications before the procedure:

6. Aspirin - you can usually to continue this although there is increased risks of bleeding

It is important to discuss  with the prescribing doctors - Risks of stopping include stroke, heart clots/deep venous thrombosis/pulmonary embolism, blockage of coronary stents. Sometimes Clexane injections need to be given up to day before the scope eg once INR is less than 2 if patient has a mechanical heart valve

1 DAY BEFORE THE PROCEDURE

Take only a low fibre diet(without any seeds(these can block up the scope), avoid skins of fruits, corn etc)

Drink clear fluids only after a light early dinner(best to have this before 7pm).

Take 3 sachets of Picoprep(these come in a box and can be purchased from the pharmacy) - mix each sachet with a glass of warm water.

For a MORNING colonoscopy - take the Picoprep at:

For an AFTERNOON colonoscopy - take the Picoprep at:

10pm the night before

8am in the morning

and 10am in the morning

(Avoid any milk or coffee or alcohol)

If you have renal failure - another prep is recommended : eg Glycoprep

If you have severe constipation and have previously had poor bowel prep : additional bowel prep may be needed and you may need to be on clear fluids from the morning before the procedure.

If you are mainly having haemorrhoids banded and do not want the whole of your colon examined - Fleet enema alone can be given 2 hours before the procedure half an hour apart. The endoscopist will try to pass the scope up as far as views allow. 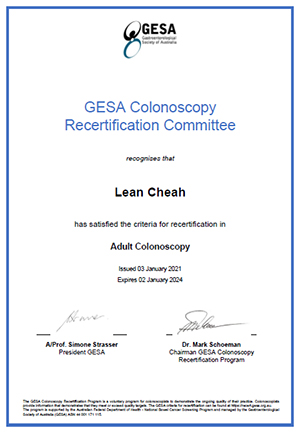 Dr LP Cheah started as a consultant general surgeon in 2006 and has amassed a wealth of experience across the range of short stay general surgery.

Feel free to read these materials: